Upon arrival in Madrid from Rome I spent the night, and then traveled by train to the ancient and conservative Catholic town of Avila in Castile y Leon.  Avila started with Roman defenses, but now is famed for its 11th century medieval walls and towers which still completely encircle the Old City.  Its 11th to 14th century Gothic cathedral sits on the high point in the town where its apse forms part of the defensive wall structure and 5 entrance gates.

I specifically hurried to Avila for its Easter week sacred processions, which happen each evening after sunset.  All over central Spain, various regional brotherhoods, known as cofradias in Spanish, maintain floats, here called “tronos,” year-round in the churches and cathedrals.  The floats are foundations for religious sculptures and scenes exhibiting events of the holy week leading to the crucifixion and resurrection.  The cofradias, with various other penitents, dress in colorful robes with masks and pointed headdress, called “capirotes”, then march with the tronos through the darkening streets of the old cities, usually with a band playing mournful music.  The processions in Castile and Leon are considered the most solemn and authentic, dating back many centuries.  Most Americans upon first seeing such a procession are stunned that the penitents appear to be dressed as the Ku Klux Klan, though most robes, masks and tall pointed headdress are colorful.  The penitent’s capirote has been traditional for centuries and the head-dress with mask is worn out of modesty, as penance is to be practiced anonymously.  No one seems to know why, or how, the KKK wound up with such a similar copy of this ancient penitent dress, though KKK robes always are white.

I had a wonderful hotel room in Palacio de la Velada, a late 15th  to early 16th century palace, one of many in town; of its roughly 140 rooms, I had one of only five with a balcony opening onto the Cathedral plaza, and so watched some of the processions from my private balcony.  I believe I watched 5 entire processions and obtained some wonderful video.  Again, I wish I could figure out how easily to downsize the high resolution video (each several minute clip of video is many Gigabytes of data) and make it available on my website.

Avila’s mostly 14th century Gothic Cathedral is a magnificent wonder – but Avila has also, just outside the Arco San Vicente Gate, the early 12th century Basilica San Vicente, thought by some to be the finest Romanesque Church in Spain.  It is a beauty inside and out, and the Romanesque portals, arches and capitals are the best preserved I have seen.  Also, inside just before the altar, sits a massive Romanesque cenotaph to the martyred Saints Vicente, Sabina and Cristeta, with the wonderful gold covered sides and preserved carved and painted wooden scenes from the martyrdom.

After 4 days in Avila, I traveled again by train onward west the short distance to my favorite town, Salamanca.  The weather, unfortunately, was chilly and rainy almost my entire time in Avila, and has grown only worse upon arrival in Salamanca.  The locals are complaining this is a somewhat unusual early spring pattern. Tomorrow the weather is forecast finally to improve, and so I have just booked 3 more days in Salamanca to take advantage of some decent sunshine and warmth for photography and outdoor tapas bar evenings.

Once again I am housed in a magnificent location.  The Baroque Plaza Mayor of Salamanca was built in the early 1700s by the Churriguera cousins, and is one of the largest, and considered by many the finest, Plaza Mayor in all of Spain; to my eyes it easily improves on the great Plaza Mayor of Madrid.  Built per request of the King, it became the city center and was used also for bull fights until the last century. It is formed as a huge unequally sided square, with close to 100 arches on the ground levels and 3 stories of balconied rooms above, completely enclosing the square.  Six large entrance arches permit access from all city directions.  All is constructed of the Salamanca soft yellow limestone.  Ten of the rooms above the Plaza have been converted to a private hotel within the last year.  Each room is modern; 5 rooms open on the market to the East of the Plaza, and 6 have wide double glass doors and balconies opening out onto the Plaza itself.  I have one of these rooms.  In my years visiting Salamanca I never have been able to enter the Plaza’s upper floor rooms for a view and now I am living, for a few days, in one. 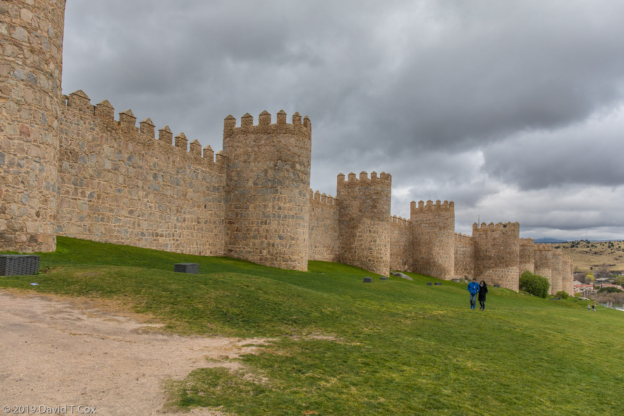 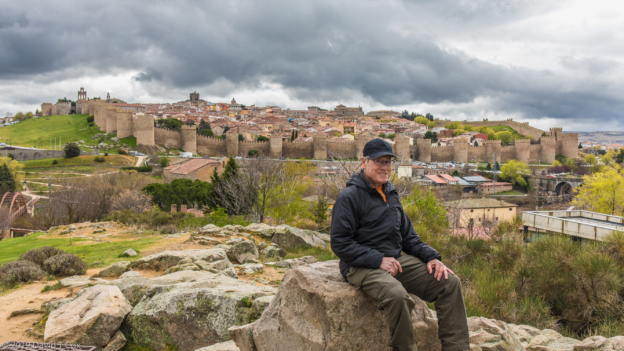 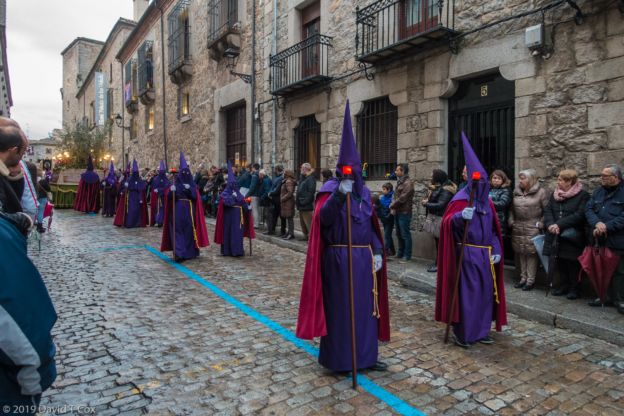 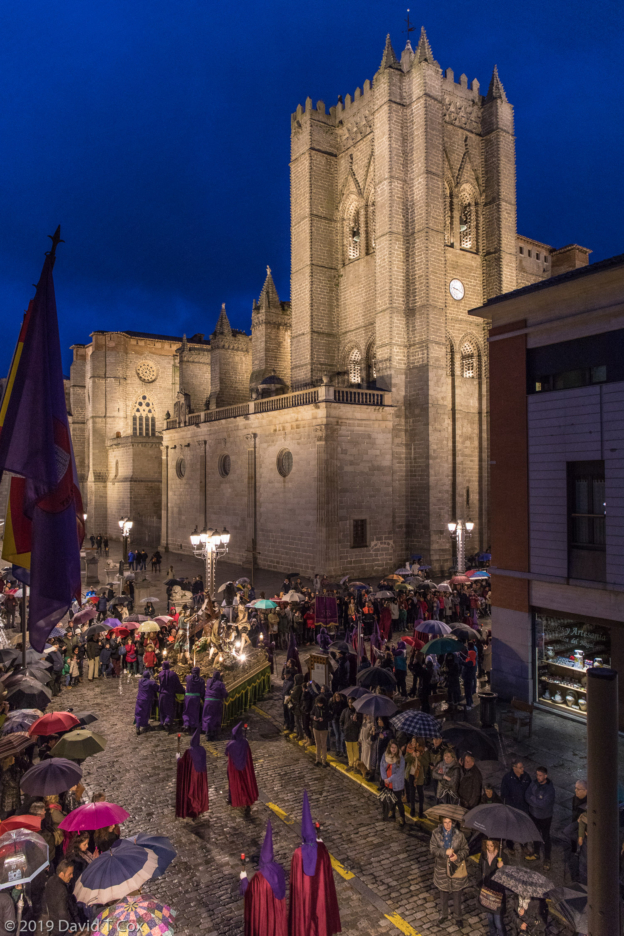 Sacred Thursday April 28, 2019, Procession as seen from my balcony, before Easter, Avila, Spain 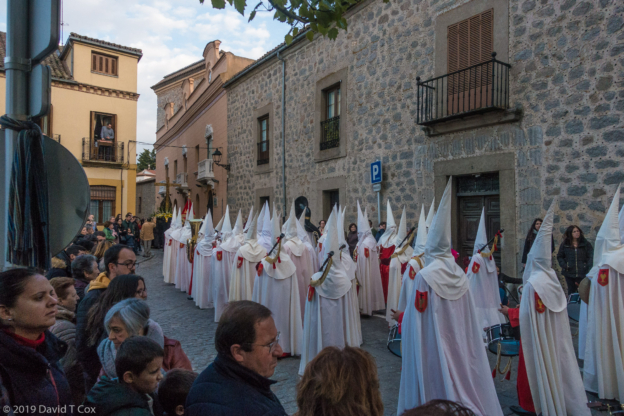 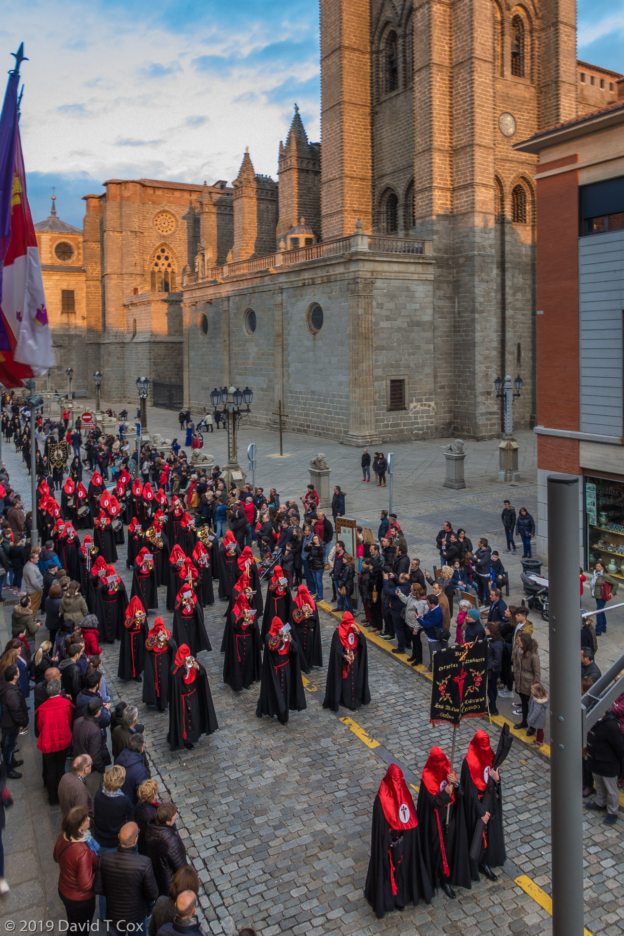 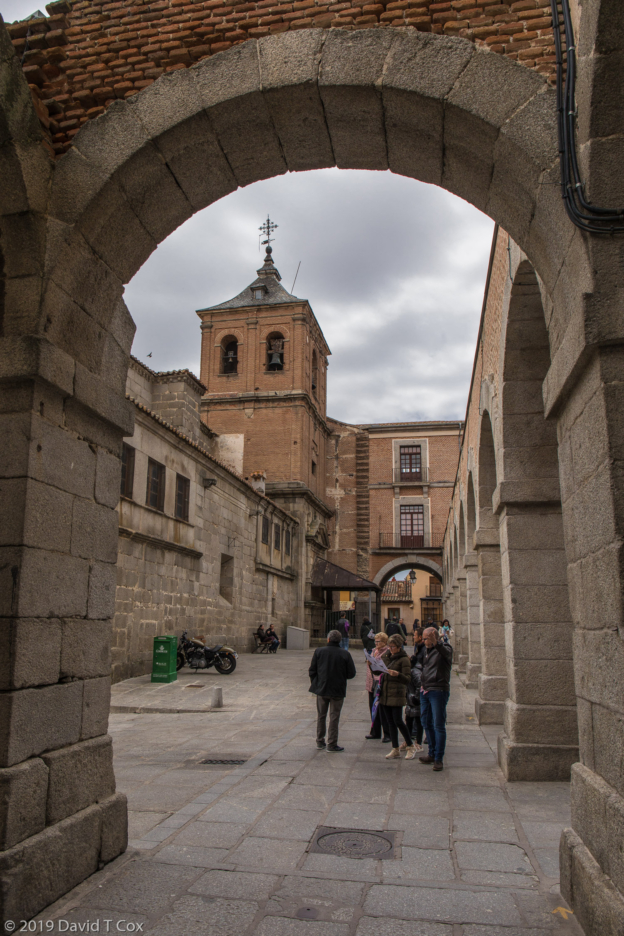 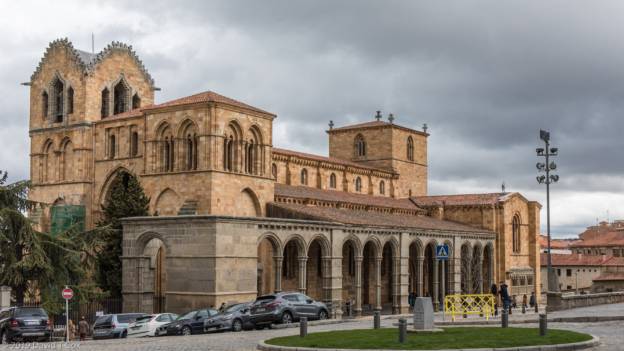 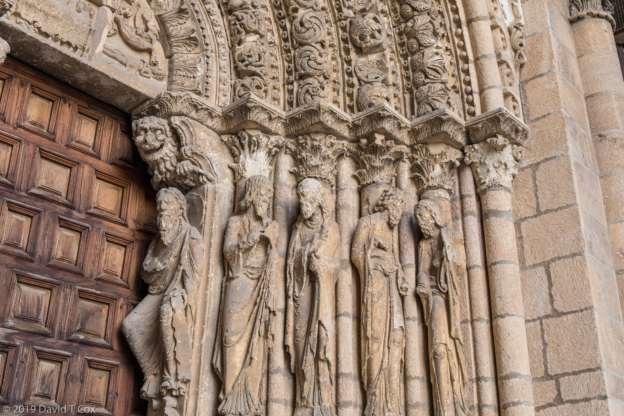 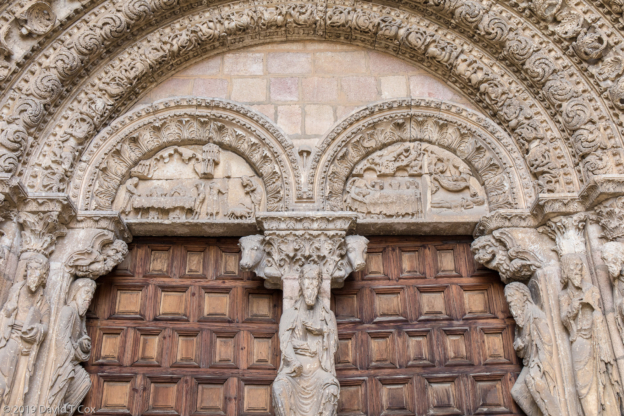 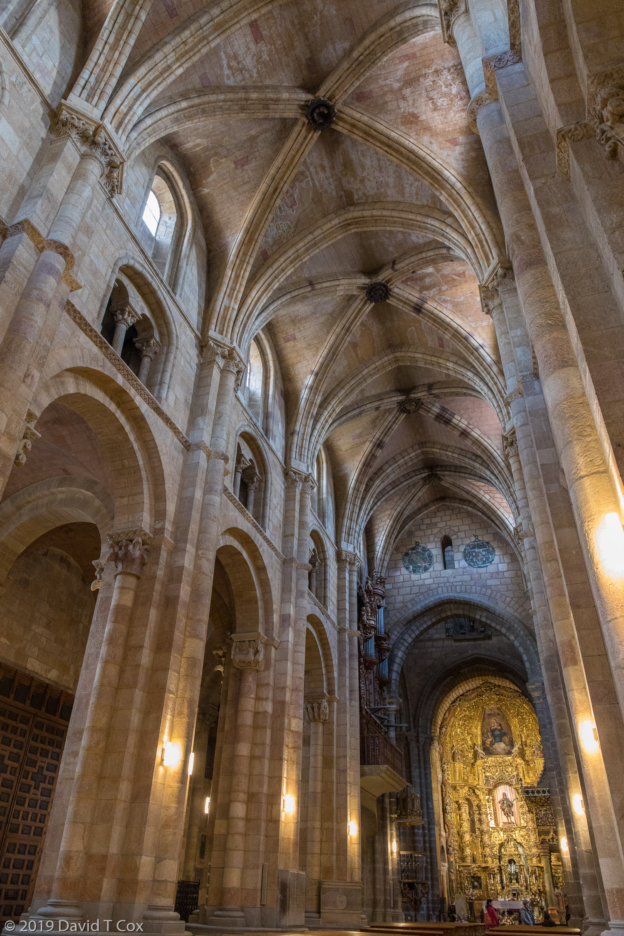 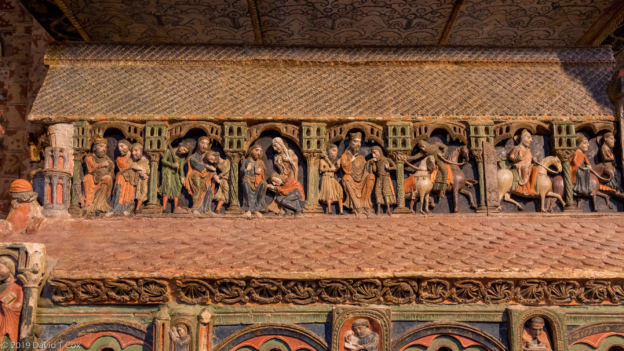 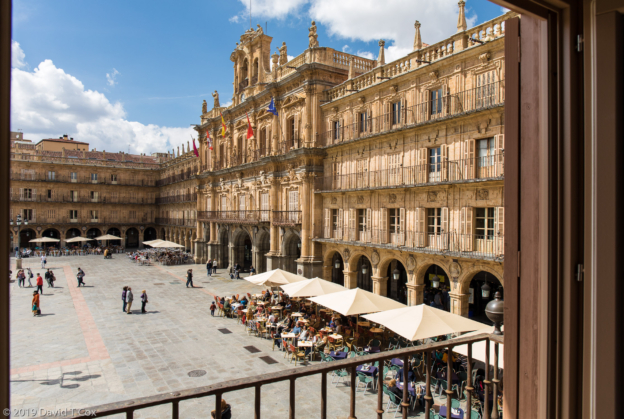 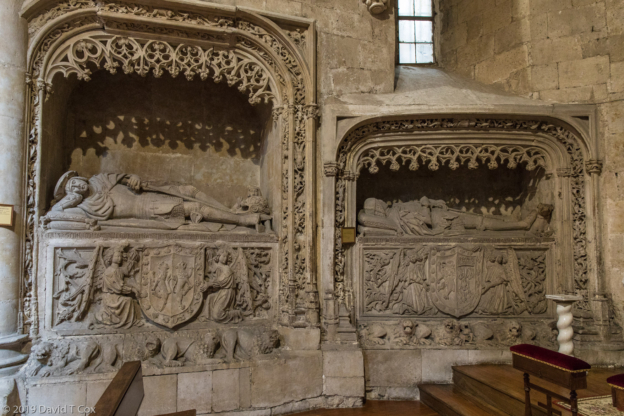 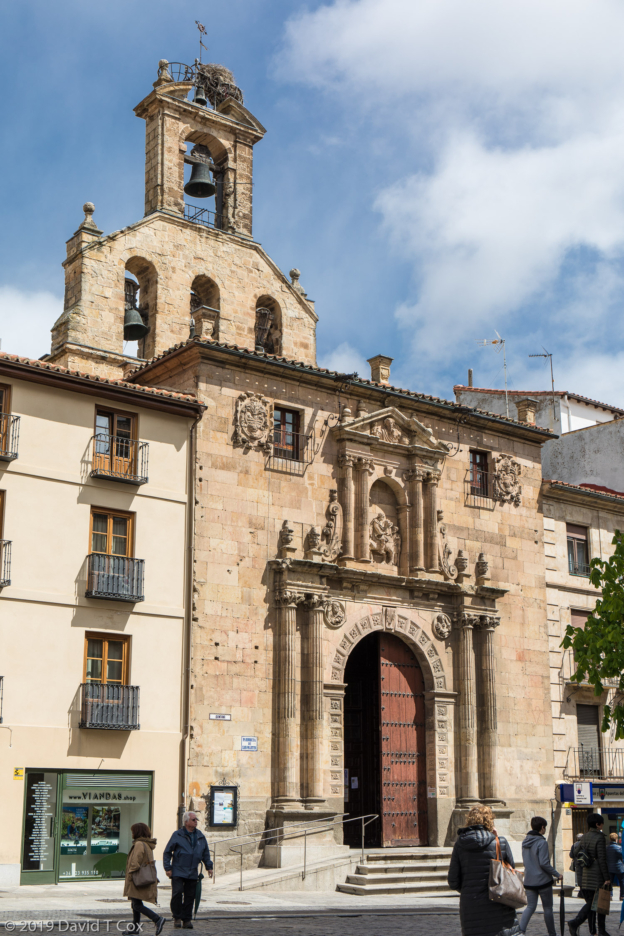 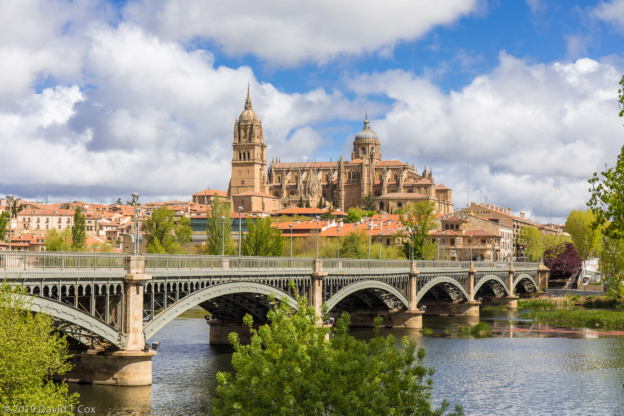