Hello everyone.  I am delighted once more to be on the road, anticipating this trip will cover many parts of Colombia for wildlife and bird photography.  I left Tucson Monday morning Dec 5, and arrived in Bogota shortly after midnight on Tuesday.  Multiple sources recommend never hiring a taxi off the street or hailing an open one at the airport – a common problem in Bogota being referred to as the “millionaire ride,” where the taxi in transit stops on a side street allowing 2 friends to hop in, and they then spend the next several hours first robbing, then forcing, the hapless victim to utilize ATMs for cash on all cards until the daily limit is reached (This taxi crime is common also in Mexico City).  Therefore, one always is encouraged to call a taxi from an authorized company, or buy a taxi ticket at the authorized booth at the airport or bus stations.  There is a catch at the Bogota airport – the authorized taxi ticket booth is inside the international terminal where one exits customs, but the taxi ticket vendor only accepts cash payment in Colombian pesos.  Beside the taxi ticket booth is an international monetary exchange booth with outrageous expensive exchange rates.  The Bank ATMs which dispense Colombian pesos at the bank’s daily exchange rates are located just outside the terminal exit.  I went out, used an ATM for cash, then found I could not reenter the terminal to purchase a taxi ticket.  Instead, outside I was directed to another special taxi booth where I could buy an authorized ticket for a large luxury van at exactly twice the regular taxi rate.  What a system.  I took a normal taxi from the taxi ranks without issue, other than the extra 20 minutes of drive time the elderly driver spent going in circles trying to locate my little B&B hotel.  Next trip I will utilize the hotel’s offer to arrange an authorized taxi to pick me up.

Bogota is quite a clean and relatively modern city, at least around the Centro Historico (the colonial town center), and along the Avenida El Dorado which hosts one leg of the Transmilenio transport system down the middle. The El Dorado road runs from downtown all the way out to the airport. My hotel is closer to the airport, a location decision made to save me over an hour each way in taxi time.  To visit downtown, I just hopped on the Transmilenio, the ultra-modern bus system famous in Bogota, and now copied in Madrid and Mexico City, among other world capitals (sadly not in Tucson, where they chose to start with an overpriced rail line).  Rather than subway or metro rail lines, the Transmilenio utilizes buses which have 2 to 4 cars joined like trams.  They run entirely in dedicated lanes, and stop at frequent stations which operate like most metro and subway systems; that is you purchase rides on refillable cards outside the station, then simply touch the card to the entry turn-style to enter the station.  Once inside one can freely ride the system anywhere in the city, changing buses as necessary, and exiting the system at the destination.  It took me just 15 minutes to get downtown, and I could watch in amazement at the endless multilane traffic jams on either side of the Transmilenio.

Practically all of the really old colonial era buildings and churches, of which there never were many, have been destroyed multiple times by fire or war, and so the city does not compete with historic centers like in Mexico City, Guadalajara or even Lima.  But around the famous and original Plaza Bolivar (practically all South American cities of any size surround a Plaza Bolivar, named for Simon Bolivar, the independence hero for South America), are a number of interesting 17th to 19th century buildings, with pedestrian streets and many “living” statues lining the way as in Barcelona (these are “artists” which set up props and then generally paint themselves entirely silver, bronze or gold and strike poses representing a scene as one might encounter with a work of metallic art).

I have found a street with a dozen cheap restaurants a few blocks from my hotel where I am taking my evening meals.  On the 7th of December I went into a large open-fronted restaurant called Asadero de Carne, Mi Lindo Ranchito, a grilled meat restaurant.  The large interior had a couple dozen tables, but no customers.  Several young men were gathered partying in front of the large wood grill located behind a large bar.  They insisted the restaurant was open (I normally eat about 6pm, and almost all restaurants are then empty, but fill by 7pm), so I ordered a beer and had them show me what cuts of meat were available for grilling.  The day, Dec 7, is a special festival here in Colombia, the Dia de las Velitas, or Day of the Little Candles, which honors the Virgin Mary.  The staff, including the owner, stood drinking rum and 7-Up, which they shared with me (I only took a sip, sticking to my beer).  I wound up ordering the Punta de Anca cut of meat, which is a tri-tip sirloin cut famous for grilling in Colombia.  I cannot properly describe the huge platter they eventually brought me.  They thick-sliced and grilled the entire tri-tip cut, close to two pounds of meat, and served the slices spread to entirely cover a mound of French fries, roasted yucca and guacamole on a large oblong platter.  I can eat a huge amount of food, but was fully stuffed just a little over half way through that meal.  The entire meal plus two beers and lots of fun set me back just over $9 US.  As other customers started to arrive we toned down our private party, but took a bunch of pictures. On my 6 block walk back home through residential streets, almost every 5th house had the family outside lighting sets of candles on the sidewalks.  I have great memories of the Day of the Little Candles.

I spent Thursday with a hired taxi visiting two “humedals” (marshlands) just northwest of greater Bogota.  These sites were recommended for rare and endemic birds in my guide book to birding sites in Colombia.  Both sites recommended, and I agreed, to be accompanied by an armed guard, as robbers had plagued the large marshlands in recent years. Two rare endemic species exist nowhere else except in these local marshlands, and so may go extinct in the not distant future, one being the Bogota rail. Unfortunately, both sites appeared somewhat polluted, with one being completely bordered on one side by new high rise cheap apartment buildings which drained sickly looking water into the marsh.  I did see a number of birds, but all were of the more common varieties, and so the day was not what I had hoped.

From Bogota I flew to Leticia on Saturday – Leticia is a small town sitting on the bank of the Amazon River, at the point where Colombia, Brazil and Peru all meet.  I will spend the next 17 days along the Amazon, hoping the oncoming rainy “season” (it always rains, but is most constant and heavy around February) does not start early.  Later.  Dave 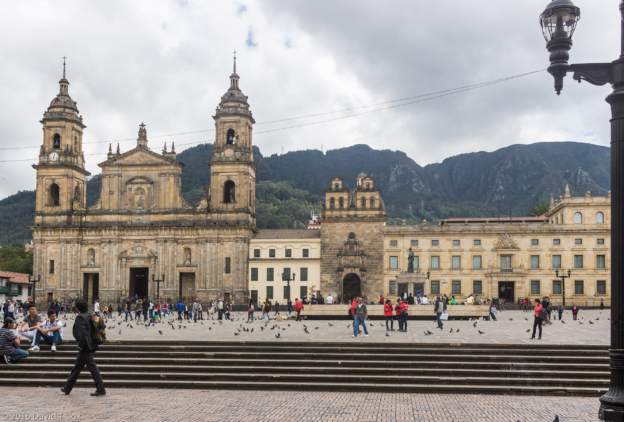 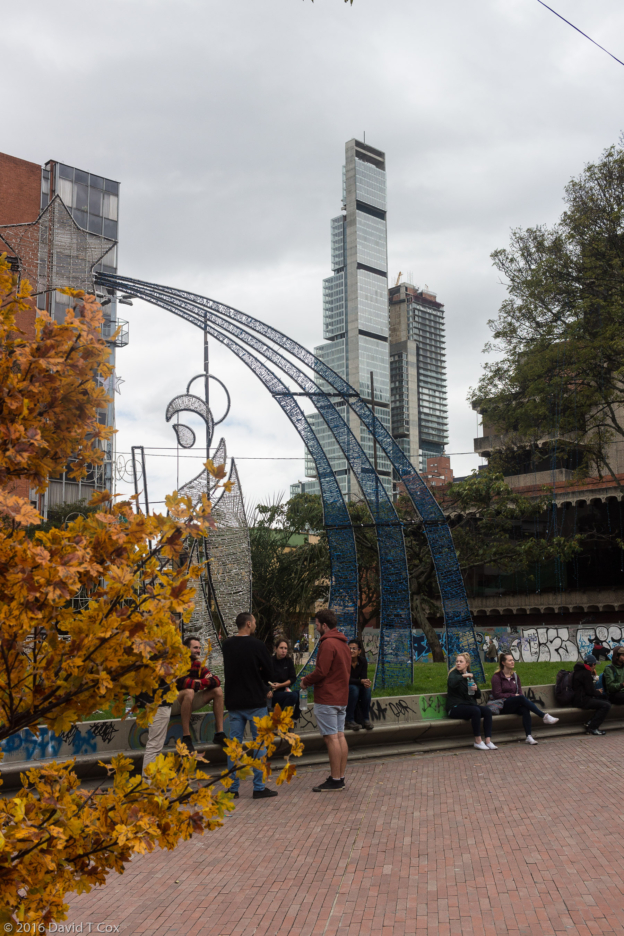 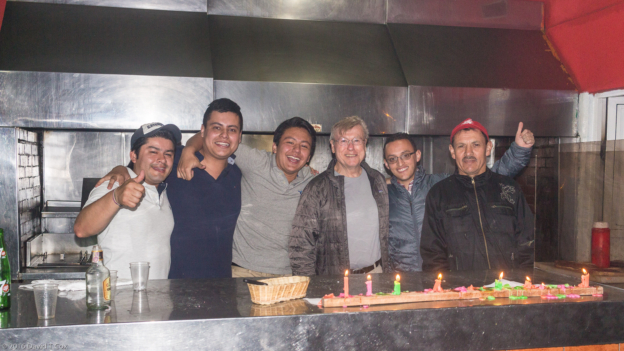 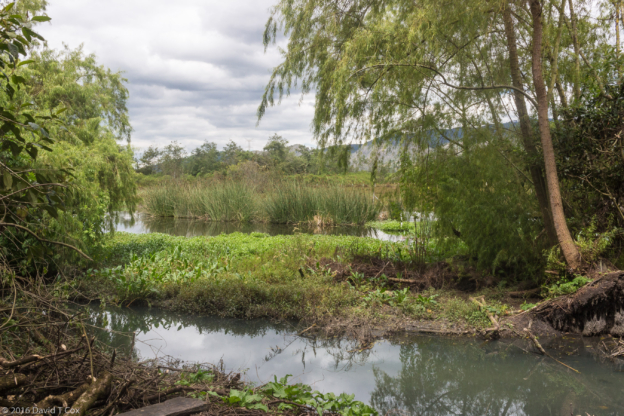 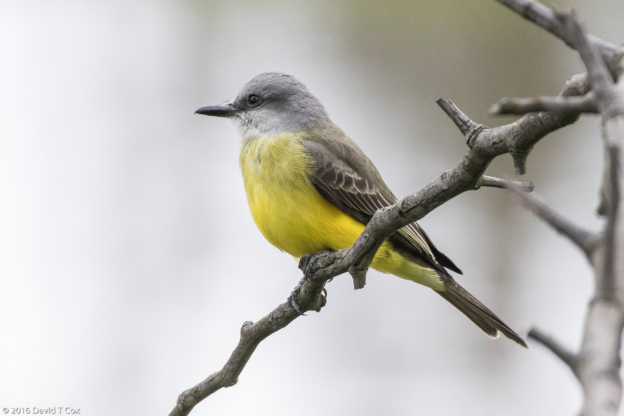 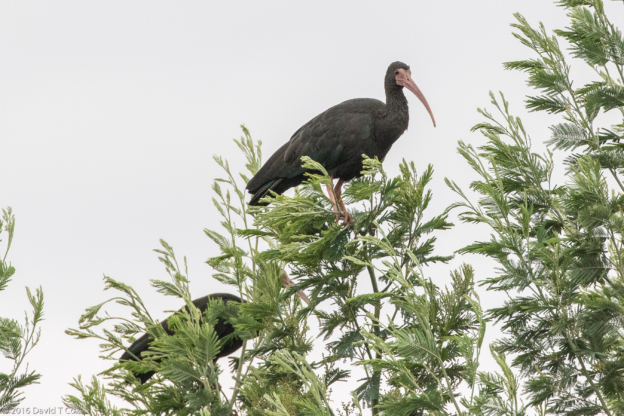