I last wrote from Bordeaux, France, from where I traveled by bus to Pamplona in the ancient Kingdom of Navarra on the edge of Basque Country.  This is the famous setting for Hemmingway’s book “The Sun Also Rises.”  He wrote most of the book at the Café (Casino) Iruna (Iruna is the Basque name for Pamplona), in the central Plaza del Castillo.  For those who don’t recall, he spent several months here, drinking heavily with his literary friends from Paris, and the book, although a novel, based its characters on his actual friends and placed its setting in Pamplona and the Iruna Cafe.  This novel made famous the San Fermin Festival held every July with the Running of the Bulls.   I spent my wine and cigar evenings, as on previous trips, at the terrace tables of the Iruna Café.

Pamplona has a number of 12th century churches and artwork, all Romanesque in style, which is on the old side even for Spain.  Its small Museum of Fine Arts contains many Roman mosaics and statues, wonderful 11th and 12th century Romanesque capitals from the Cathedral, and a number of decent paintings, including one of Goya’s greatest portraits, that of the Marquis of San Adrian.  The cathedral has the alabaster mausoleum for Carlos III and Leonor, King and Queen of Navarra in the early 15th century before the conquest by Ferdinand and Isabella which united the Iberian Peninsula.  The mausoleum comes with included sets of alabaster mourners arranged around all four sides.

My apartment in Pamplona was a long narrow affair running the entire depth of the 6 story building and so had outward facing windows on both sides.  Although recently renovated, the kitchen was outfitted with matching, dazzling hot-pink, retro-style fridge, toaster and teapot (I included a photo just to verify my report).

From Pamplona I traveled the short distance to Burgos, the seat of the Catholic Monarchs, Ferdinand and Isabella, and the place they met with Columbus to send him off for his discovery of the New World.  Here is the great 12th to 14th century Romanesque/Gothic Cathedral which, though not quite the largest (Seville’s has that honor), is probably the finest in all Spain. It also now is the resting place for the remains of Rodrigo Diaz, the most famous of all warriors who led the expulsion of the Moors from most of Northern Spain.  He is better known as “El Cid,” and a mighty bronze statue of him upon a great horse sits at the Plaza El Cid and main bridge into Burgos.  The cathedral also contains a number of mausoleums to patrons and royalty, with alabaster likenesses of the dead within.

My apartment in Burgos was one of those 6th floor roof-top jobs where you literally are under the sloping roof, so your ceilings slope downwards almost to the floor at the walls.  Very peculiar living.  The windows jutting out of the ceiling opened onto the Plaza Mayor affording a magnificent view of the Plaza and Burgos Cathedral.  I have included a large panorama photo of the view taken under black thunderstorm clouds.

Burgos sits by the famous Sierra de Atapuerca sites where a series of underground water courses has opened pits, or “simas,” and caves which provided many of the earliest known locations outside of Africa for early humans.  The Museum of Human Evolution has recently been opened in Burgos to display all the discoveries made at Atapuerca.  This includes 1.3 million year old hominids seemingly from Asia rather than Africa, 1.1 million year old remains of Homo-antecessor which the scientists here now believe was the common ancestor of Neanderthal and Sapiens, and 400,000 plus year old genetic tested specimens from the Sima Pits now confirmed as early neanderthalensis, necessarily making the sapiens divergence much older than thought (probably around 800,000-900,000 years ago).  These continuing discoveries make Atapuerca one of the most active early human sites in the world, and together with southern Morocco and parts of Asia continually challenge the notion that almost all hominid evolution occurred in eastern Africa.

From Burgos I traveled by train back to Madrid last Thursday, and found a terrific set of apartments just south of the Plaza Mayor, putting me into the Latina neighborhood, but still just a short walk from Huertas where I often stay.  Both are famous for their tapas bars and plazas with terraced cafes.  Now-a-days many wonderful bronze statues are placed in locations where they perfectly mimic insertion into the crowds of people, although they don’t seem to move much.  I have included several photos of this wonderful form of public sculpture.

I did spend over 3 hours in the fabulous National Museum of Archaeology, my third time.  It covers the human evolution in southern Europe, most of which occurred in the Iberian Peninsula, followed by the Iberian bronze age cultures and, of course, the many occupations and settlements, first by the Phoenicians followed by the Carthaginians, Romans, Visigoths and Moors ending finally with the Reconquista.   Several of the most outstanding pieces are life-size Iberian funerary urns of ladies from the late Bronze Age; the best known is the “Lady of Elche” from the late 5th century BC.

I am winding down this trip, and fly back to Tucson Wednesday the 12th.  Life continues to be good.  Later.  Dave 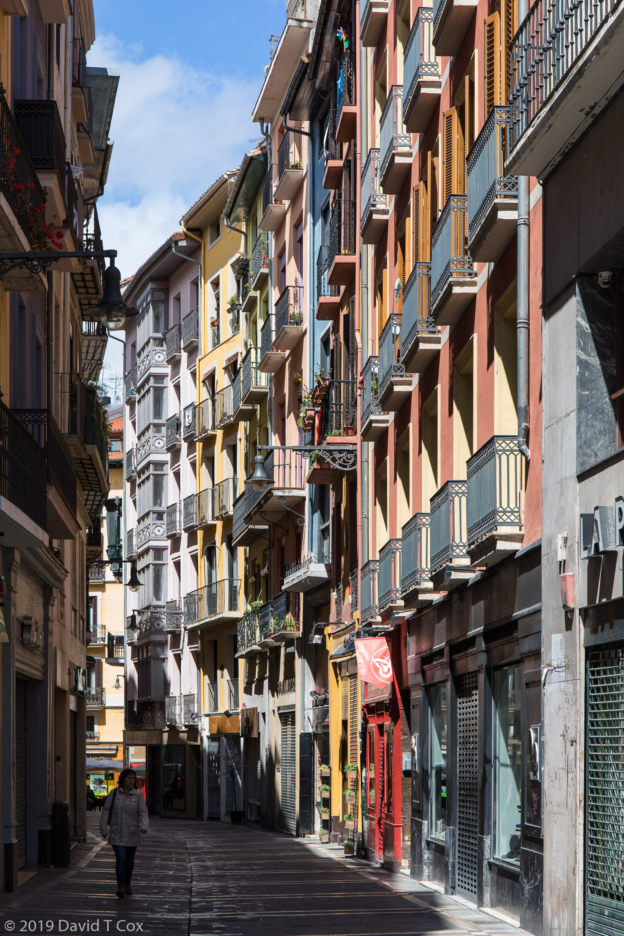 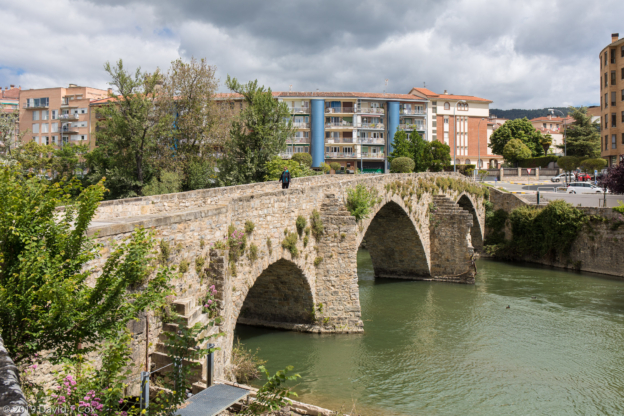 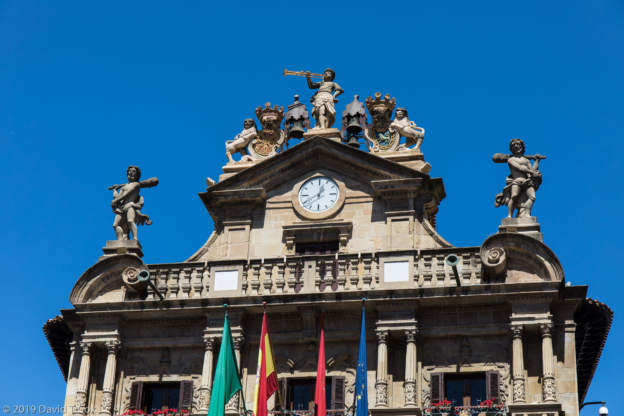 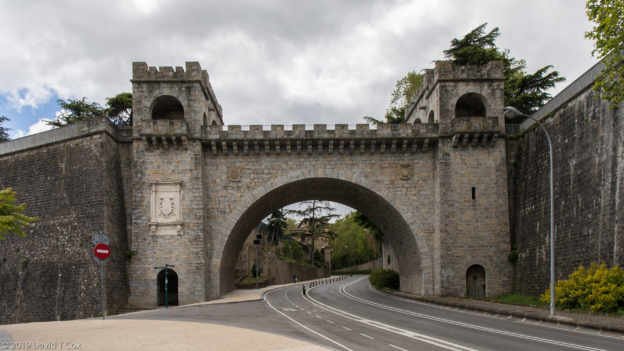 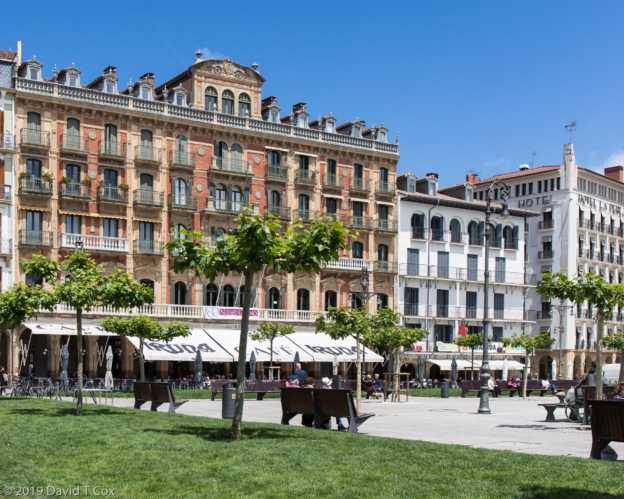 Cafe Iruna, my afternoon haunt and where Hemmingway drank with his companions and wrote “The Sun Also Rises”, Plaza del Castillo, Pamplona, Spain 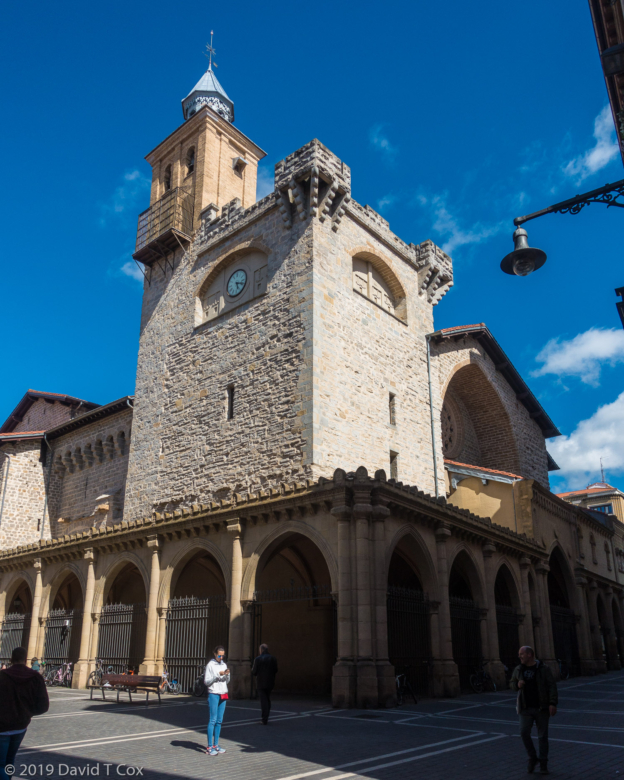 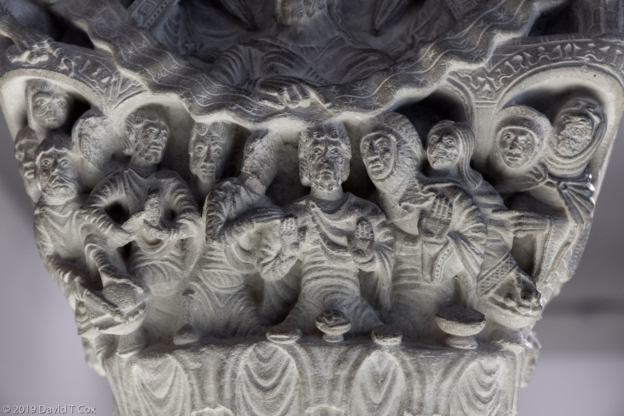 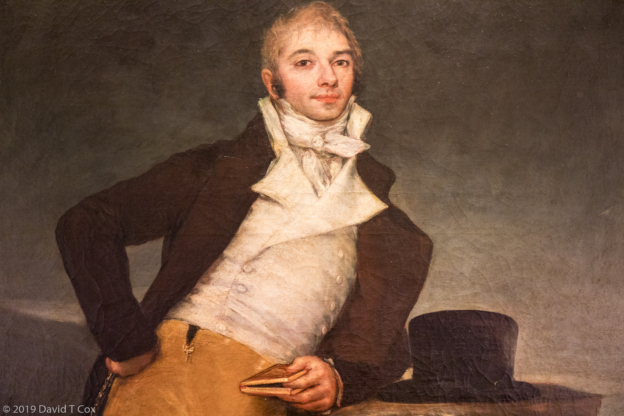 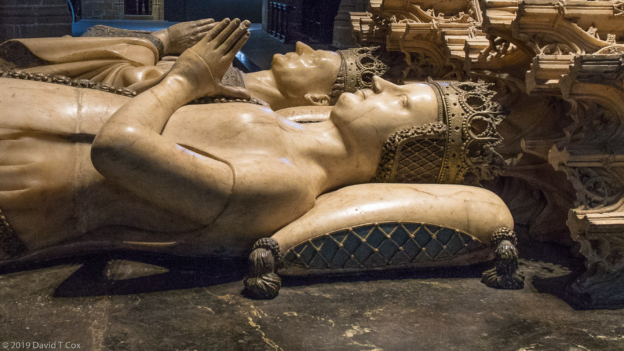 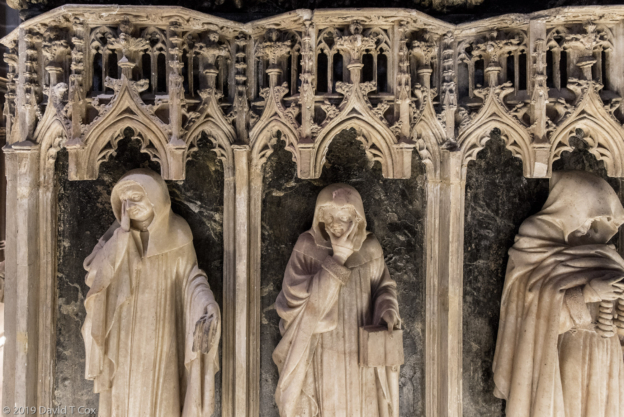 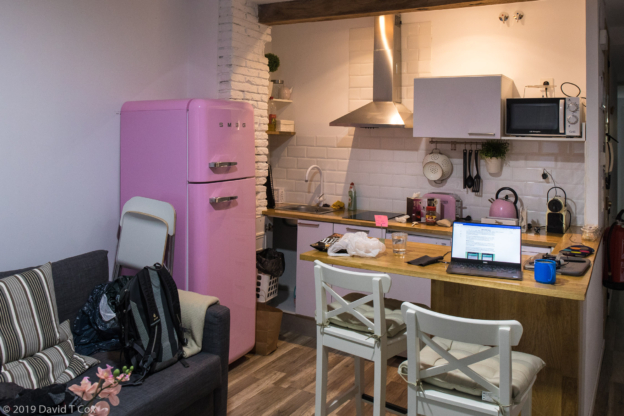 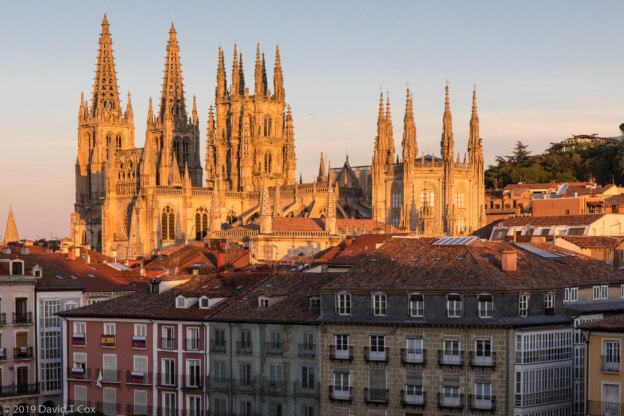 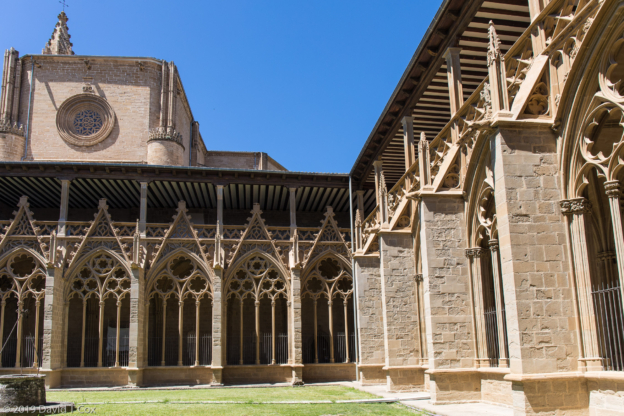 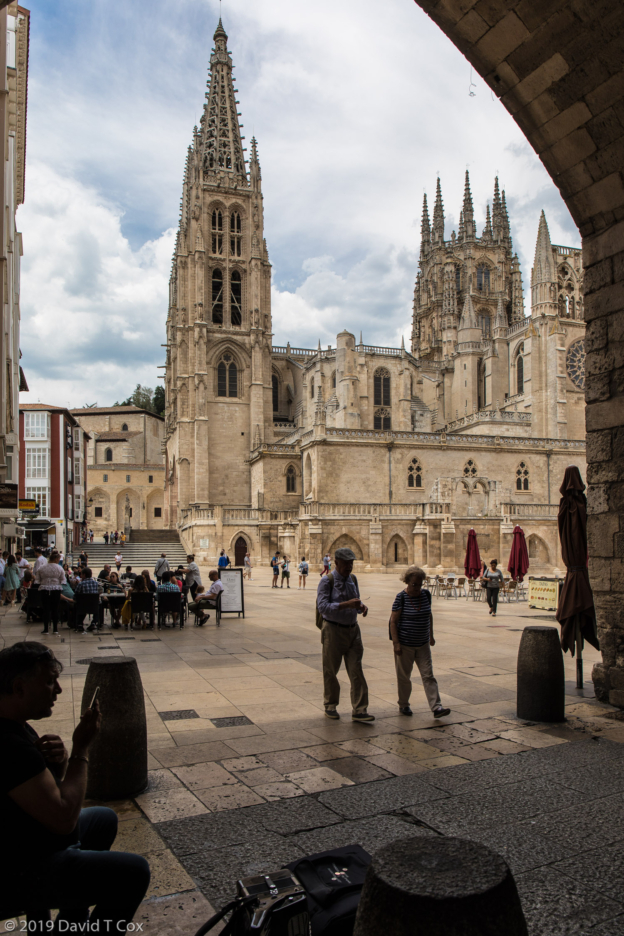 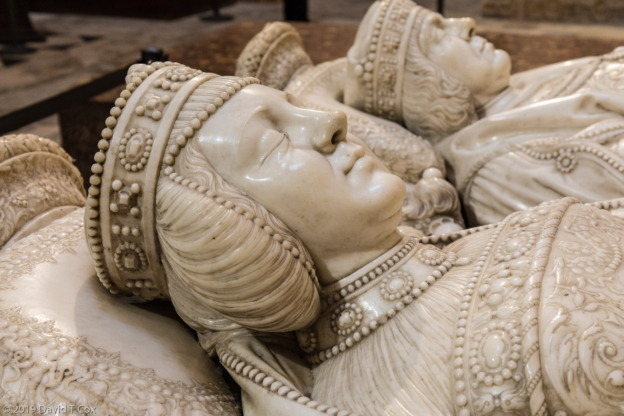 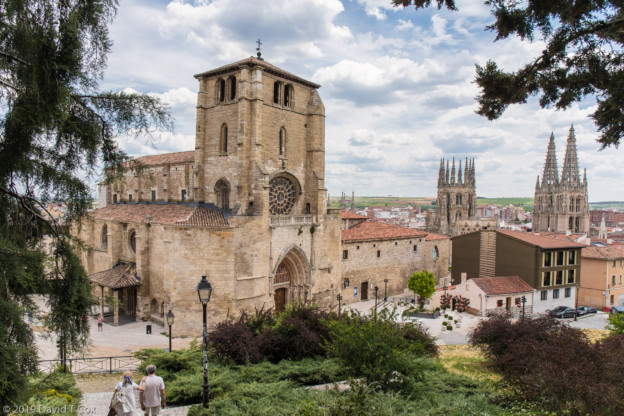 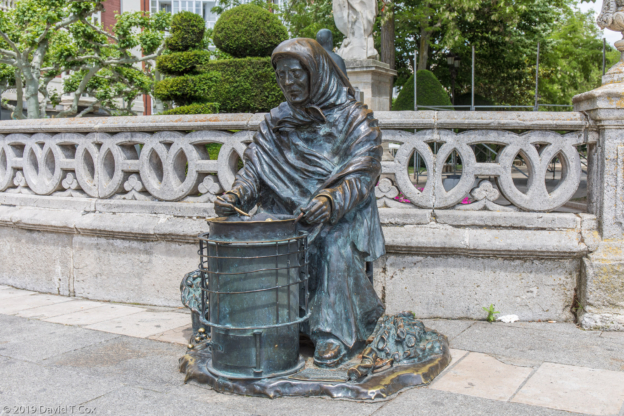 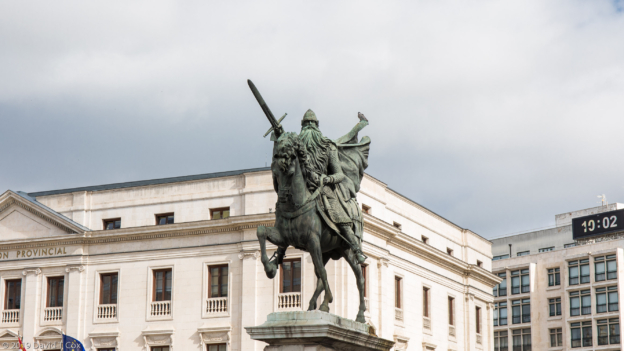 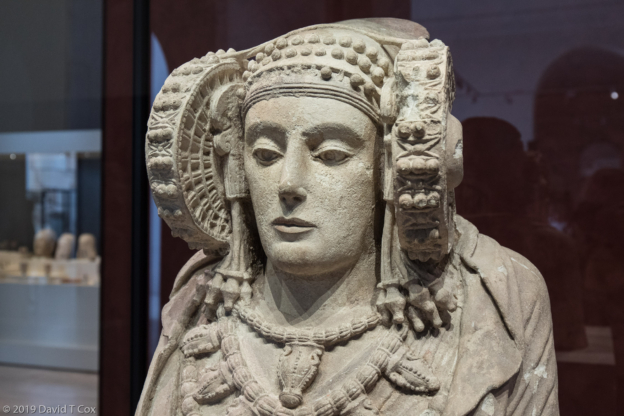 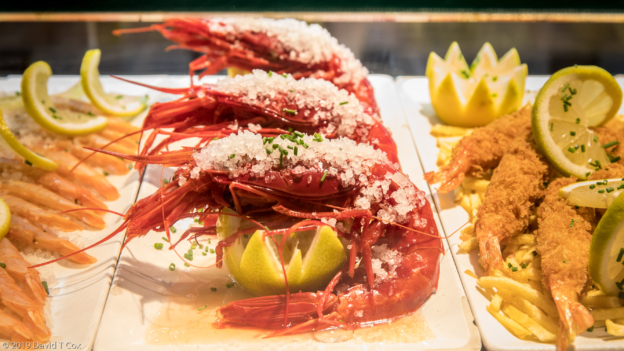 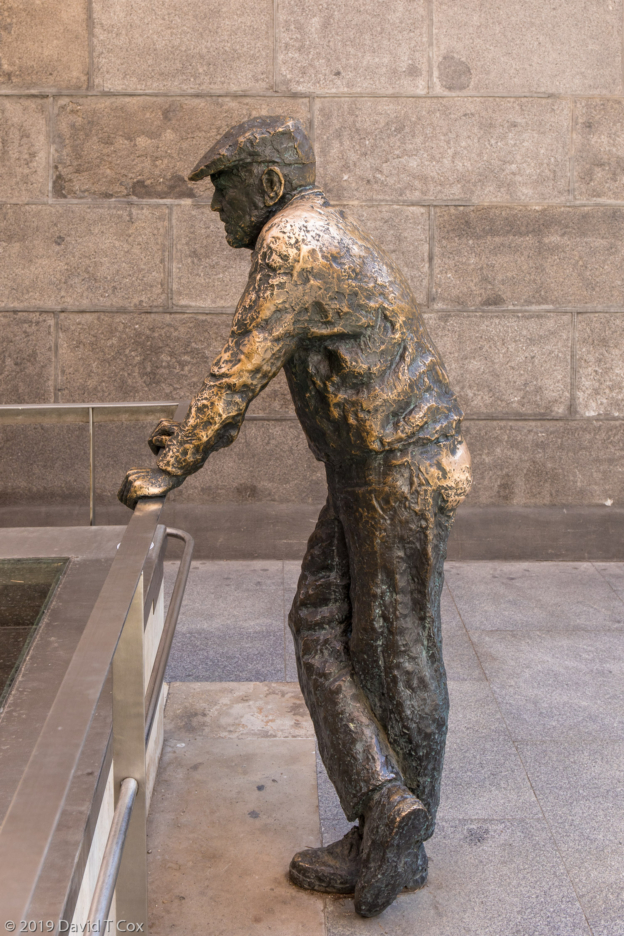 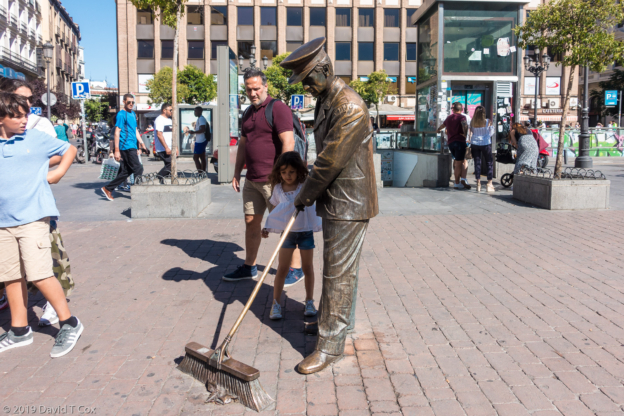